“What type of music can represent the contemporary world? Doubtless it would be modern music, the type of music that has its roots in the reality of daily life, that reports on social upheavals and the fact that the majority of the public couldn’t care less about music. At the same time there would have to be – as is true of any truth – something sensational about it and to this aim it would suffice for it not to be false, as is the type of music that is going around the cultural world at the moment and that imposes false feelings and relationships on the public, as well as constituting a perpetual obstacle between Man and his time.”
Fred K. Prieberg, 1960, Musica Ex Machina, Berlin, Einaudi

Setola di Maiale is a radical label of independent musicians, improvisers and composers. It was set up in January 1993 by musicians Stefano Giust and, in the early, Paolo De Piaggi, with the clear intent to highlight creative music. The main purpose of Setola di Maiale is to compensate a widespread need in the community of adventurous musicians, ie to give body and continuity to creative musics, providing a further opportunity that can document, at least in part, the path of a non-commercial musical project. Setola di Maiale is founded on direct participation and by the distinctive creativity of all musicians involved. From this way of working, many forms of collaborations were born along with meetings, friendships, three festivals, the performances at the 48th Venice Biennale or at Radio Resonance of the London Musicians’ Collective or even, the presence at Angelica Festival Internazionale Di Musica (Bologna), the Hanoi New Music Festival in Vietnam, the Axes Beuk Festival/TAC-Temporary Art Center (Eindhoven). The catalogue, initially printed on paper, has passed the four hundred titles and documents both the music and the experiences of this body of work. It offers official albums of soloists and groups, in the fields of so-called avant-garde, such as free improvisation, free jazz, electroacoustic, modern composition, acousmatic, electronic, experimental music and all those difficult musics to catalog, unconventional. Contemporary music in its wider form of expression. The works are produced in limited editions with Cd support or high quality Cdr, very accurate and professional, I take care personally of every graphic design project, being a graphic designer with professional experience. Productions are always released according with the artists own will. Setola di Maiale is neither a commercial label nor an association: it’s rather a laboratory/archives that operates within a free and creative environment. The polemical Prieberg’s words, the exergue above, has always been used since the very beginning of the label. Note that nothing is changed in more than fifty years. Diy attitude is inevitably the only way for certain type of music – that we call Art Music – to exist, without the help of public or private funding and in a market that either is clearly not there, or is stereotyped. Setola di Maiale could be thought as a pure commercial utopia.

If you like these type of choices, probably you know how difficult is to survive making non commercial music: you can support Setola di Maiale, just buy one or more albums through the website. Anyway, thank you for having thought on this.

For the complete catalogue, more info and orders with PayPal, visit the website:
www.setoladimaiale.net

These 25 years of activity have been remembered at the 28th edition of Angelica Festival Internazionale Di Musica (Bologna), not for a self-congratulating celebration, but for a further opportunity to promote a vision of ‘other music’. As an ensemble, Setoladimaiale Unit is a possible synthesis of the label that, in this particular circumstance, has played with Evan Parker, an essential musician of free improvisation/free improvised music, and it is to this historicized ‘tradition’ that Setola di Maiale wants to continue to be approached, in a moment in which everything wants to shine with its own light, here there is a need to reiterate the continuity of an ‘enunciated spirit’, a continuity with an artistic attitude capable of expressing in different ways, always moved by a will of strong independence and self-determination: for all of us, still a revolutionary music. A big thanks to the artistic director of the festival Massimo Simonini, who made all this possible. 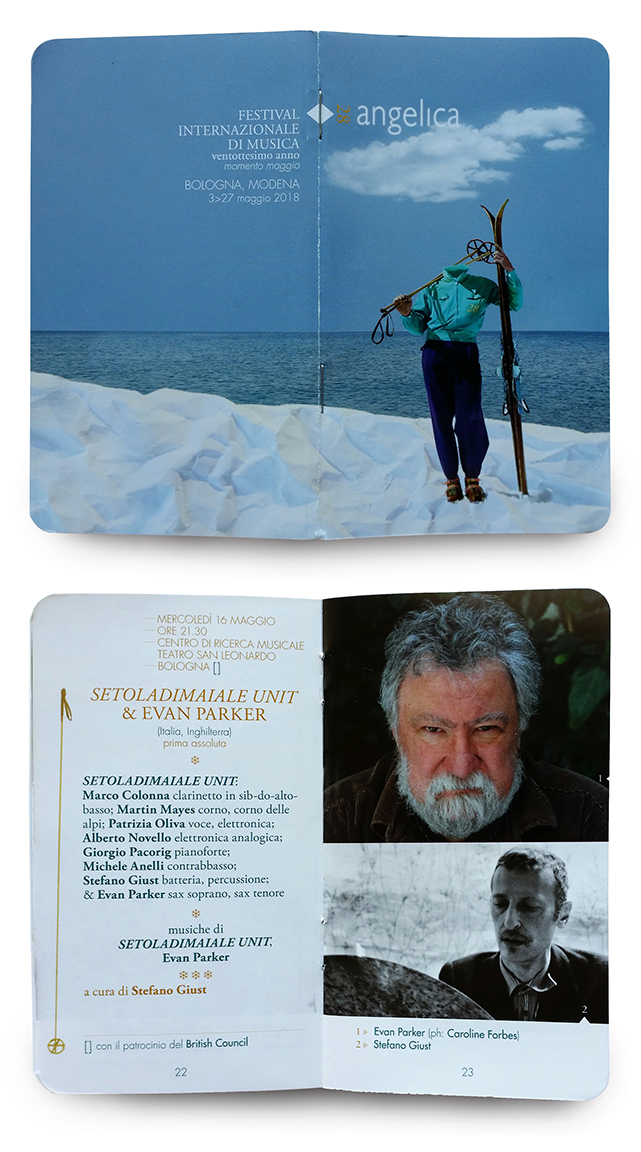 Setola di Maiale has celebrated its twentieth anniversary as part of Axes Beuk Festival at TAC-Temporary Art Center in Eindhoven, Netherlands, on 15th June 2013. There was an exhibition – open from 15th June to 16th July with all the covers of the albums produced over the years – and concerts of improvised and experimental music. All of this was possible thanks to the interest and production of artist and musician Rik van Iersel (of the Buro-Beukorkest) and Axes Jazzpower. This festival was organized at the Ex-Cerit Spazio Cultura in Pordenone on October 31st, for the first ten years of activity. The evening ended at four in the morning, alternating on three distinct stages thirty-three musicians (including Marcello Magliocchi, Carlo Actis Dato, Domenico Caliri, the Japanese Yasuhiko Tachibana and Keisuke Ota, Massimo De Mattia, Luciano Caruso, Ivan Pilat, Lorenzo Commisso, Edoardo Ricci, Stefano Bartolini and me). There were also installations and art exhibitions set up for the occasion (four visual artists, including the brilliants Federico Maddalozzo and the famous street artist Blu, who has performed with Ok-No). 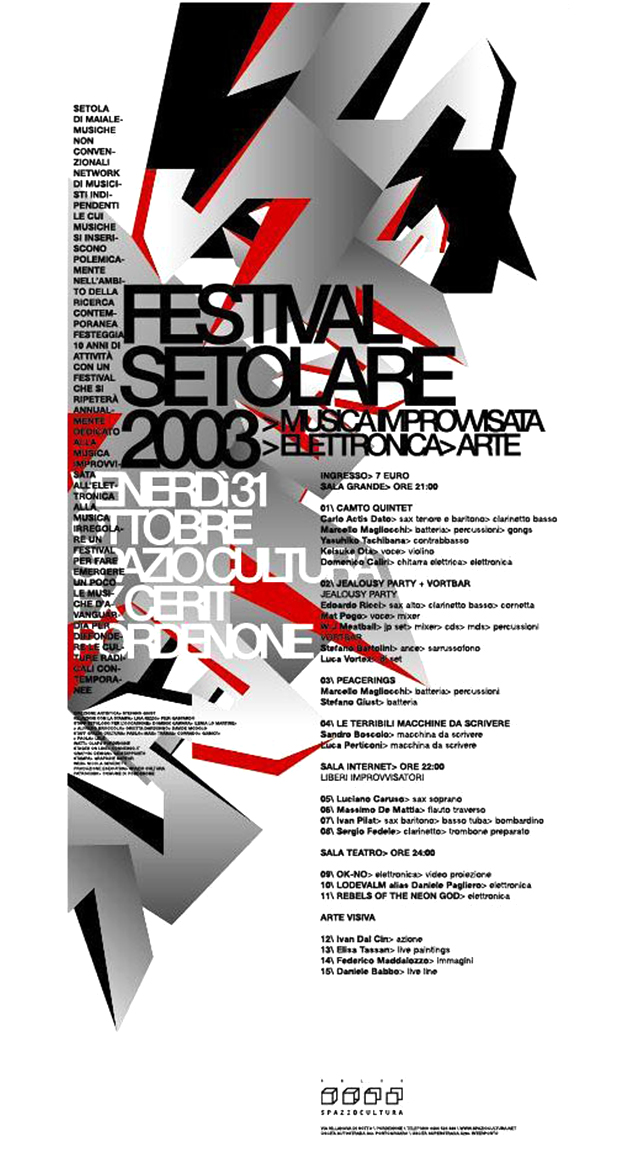